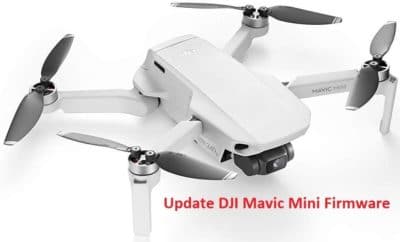 Updating the Mavic Mini every time a new firmware becomes available is important.  The Mavic Mini update will contain fixes and add new features to your drone.

Here we show you how to update the Mavic Mini firmware, which also includes the batteries and remote controller, using both DJI Fly app and DJI Assistant 2 software.

If the drone is having issues, then another great procedure to do is to calibrate the Mavic Mini. There are 3 areas to calibrate which are the compass, IMU and gimbal.

Here are the Mavic Mini update instructions to bring your drone to the latest firmware;

Follow the below steps to update the Mavic Mini firmware to the latest version;

Here are the Mavic Mini remote controller update instructions to bring it to the latest version;

Notes On The Mavic Mini Update

The Mavic Mini firmware update may reset various main controller settings, such as the RTH altitude and the maximum flight distance, to default settings. Before updating, take note of your preferred DJI Fly settings and readjust them after the update.

If the update fails, restart the Mavic Mini drone, the remote controller and DJI Fly or DJI Assistant 2 for Mavic. Then retry updating the DJI Mavic Mini again.

Note: You can find a terrific variety of Mavic Mini parts, upgrades and accessories here.

If you are having any difficulties (disconnects, flyaway, return to home) with your Mavic Mini, we have put together a very comprehensive article with easy to follow tips on troubleshooting and fixing Mavic Mini issues here.

Here are a 2 short videos, which also show you how to update the Mavic Mini drone and remote controller using both DJI Fly app and DJI Assistant 2 software. The 2nd Mavic Mini update video give you more information.

This next video covers some instructions on updating the firmware on the Mavic Mini. It also shows you the different areas within the DJI Fly app where you can check for updates and see your present Mavic Mini firmware version.

This videos also discusses the new features and bug fixes, which the Mavic Mini firmware addresses.

The Mavic Mini Care Refresh provides two replacement units for a small additional charge in one year and covers a wide variety of accidents, giving you greater peace of mind. Click on the below link to read the FAQ and for the price.

Note: Calibrate the remote controller if it is beeping after updating the firmware.